The top three teams from each district and the top 10 individuals make it to the Region 1 Cross Country Championships. The following teams and runners have advanced: 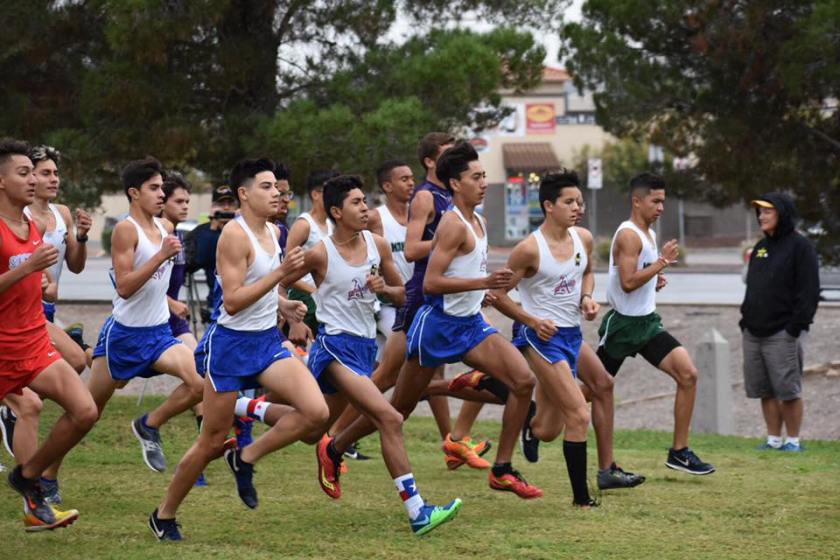 Eight district cross country championship were up for grabs on a wet, muddy hilly course at the Chamizal National Memorial Park on Friday.

Here is a rundown on the district races.

The highlight of the meet – and biggest surprise – was Jefferson’s Peterson, who won the District 1-5A championship in only her second varsity race.

“It was kind of unexpected for me,” Peterson said. “I never ran cross country before and I didn’t get started until late August so I had to build myself up to reach this point.”

Peterson, who plays basketball and is a 400-meter runner, said her friends encouraged her to run cross country.

“I never really heard much about cross country but my friends wanted me to come out and try it and now I like it,” she said.

A district championship will do that to a runner.

Jefferson’s longtime coach Alfredo Trejo said the team has been working towards this the entire season.

“This is what we’ve been working on all season, to peak at the right time,” he said. “The girls ran well today, they deserved to win it.”

He wasn’t even surprised that Peterson won.

“We thought she could run well so we brought her and ran her on JV,” he said. “She’s been getting better with every race.  And then two weeks ago we ran her here on the varsity and she ran really well.”

On the boy’s side, Burges narrowly defended its title scoring 56 points, just ahead of Chapin and Jefferson each with 63 points. All three teams advance to the regional meet

“I never thought that I could be that guy but here I am,” Wilkes said of being a district champion. “It’s something special, it’s just an awesome feeling. Four years ago I would never have thought I would be where I am now.”

Wilkes said he didn’t feel he was consistent enough or good enough to be a district champion, but here he is.

“Last year I made that jump and was able to be in that front pack,” he said. “Now I really cemented myself into that. I went to a runner’s camp and I was able to see some top talent and I saw their lifestyle and the work they put in. You can’t just put in slow miles and that changed my mentality, that really inspired me to make my jump.”

Another freshman, Eastwood’s Lauren Walls, came away with a surprise championship, winning the District 2-5A race in 19:23.73.

“I wanted to get out fast for my team and build them up from the start,” Walls said. “My only motivation was to help my team win. It surprised me that I won the race because the Eastlake girl Aeriel (Garcia) is such a good runner. She is tough and strong so I was surprised that I was able to push pass her.”

Senior Kayn Quinones led the way for the Troopers finishing third behind the Hanks junior duo of Michael Abeyta (15:42.74) and Rodger Rivera (16:03.89).

Eastlake, behind freshman Israel David (eighth, 16:33.44) and senior Carlos Armendariz (9th, 16:41.48), finished second with 74 points, one point ahead of Hanks. All three teams will be headed to regionals.

“It feels good to win district but our goal is to continue on to regionals and state so this was a good first step,” Quinones said. “The race wasn’t too bad, it was cold at the start and a little muddy and not too slippery but there were a lot of crazy turns and the hills were kind of tricky but overall it was a good race.”

For Abeyta, it was just another day at the office, winning his third District 2-5A championship.

“All the mud and the rain made it really fun,” he said. “The hills were also fun. I love hills, I train on them almost every day.”

What was different about this district championship was Abeyta brought a friend in Rivera.

“It was kind of unexpected,” Rivera said of his second-place finish. “Running in the mud is not my strong suit but I did OK. It was fun, it was a good race.”

For the first time since 2005, the Americas boys were able to hoist the District 1-6A trophy over their heads.

“They’ve been disappointed the past few years,” said Americas coach Ken Lucero. “We always have high expectations and been disappointed so this is very satisfying. We work so hard every year and we finally win it; the kids deserve it.”

Lucero has been blessed with some talented teams and runners over his 10-year tenure at Americas. He said this team ranks right up there with the best of them.

“Overall this is probably our best time,” he said. “We’ve had better individuals on the team who have finished higher. Jayden Rankins won it my first year here and then Cameron (Laverty) was the first one in school history to make it to the state and Brian Lujan was the second one so we’ve had some top level guys but as a team and the gap being close and running as a pack, this is the best one.”

Coronado was second with 55 points and Franklin was third with 77 points to earn a trip to regionals.

“Winning my first district championship feels so great,” Gonzalez said. “Liam is great. We have a great competitive relationship. It’s always back and forth between us. We really pushed each other in this race and in our training.”

Franklin sophomore Eva Jess pushed the young Cougars to its first district championship since 2005, just like the Americas boys.

The Cougars had four runners in the top 10 and finished with 34 points. Americas was second with 61 points and Coronado was third with 66.

“This is not terrible, I hope it continues for the next two years,” Jess said. “We push each other in practice every single day, we love each other so much. It’s definitely hard work but it definitely pays off.”

Don’t look now but there’s another “Estrada” on the loose.

“I know there would be a lot of great competition and I needed to push myself,” Estrada said. “Going up the big hills, I felt confident that I would do well in the race.”

Oh, and by the way, that freshman Madeline Estrada who finished fifth is the younger sister.

“It’s hard sometimes,” Nicole Estrada said of living up to the Estrada name. “I know I have to do well because of who my sisters are. I want to do good not only for me but for them too. I know they worked really hard when they were running so I want to make them proud.”

San Elizario won back-to-back team titles. But it was not easy.

San Elizario and Clint finished with an identical 36 points but the Eagles won the title based on its sixth runner junior Giselle Acevedo who finished 14th, three spots ahead of Clint’s sixth runner sophomore Leilani Navarrete.

Mt. View was third with 53 points. San Elizario, Clint and Mt. View will advance to regionals.

“We’ve come a long way,” San Elizario coach Cesar Morales said. “We lost some girls due to graduation and injuries so we came out with a fairly no group. We knew it was going to be tough with Clint and Mt. View. Before the race we talked about how important our fifth, sixth and seventh runner was going to be and it came down to the sixth runner.”

The San Elizario boys scored a perfect score of 15, placing its scoring runners in the top five.

Fabens was second with 68 points followed by Mt. View with 74. All three teams qualify for regionals as well as Clint senior Felipe Rocha (10th, 18:24.21).

Coach Morales was happy to have Arambula back after missing most of the season recovering from a broken ankle.

“My main instructions to the team was not to win but to still healthy,” Morales said. “The course was muddy and getting worse so all I wanted from them was to stay healthy and qualify for regionals. At the end we ended up getting a perfect score again but that was not the priority.”

Tornillo’s boy made it five District 3-3A championships in row Saturday morning at the Paisano Baptist Encampment in Alpine.

Carrillo managed the rocky, hillside course in 17 minutes, 11 seconds, followed by Ortega who crossed the line in 17:35.

The Coyotes ended the day with 35 points followed by Crane with 38 points and Presido with 67. All three teams will advance to the Region 1-3A Championship in Lubbock.

“We had a tough race with Crane,” Tornillo head coach Jesse Garcia said. “Crane has everybody back from last year’s team with all that experience but we managed to pull it off on a tough course against state-caliber competition.”

Last year, Tornillo was second at state, Crane was fifth and Presido was ninth.

“For me, district has always been the hardest race, even harder than regional and state,” Garcia said. “I don’t know why but it just is. We have a tough little district, it’s no joke.”

The district race helped the team prepare for the next two races.

Garcia said he was not surprised with Carrillo’s individual district championship.

“Eddie has been my number two guy all season,” Garcia said. “He has been nursing an injury all season but he did finish 11th at state last year so we knew he had it in him. Ofir wasn’t 100 percent, either. He had to go to the doctor a few times last week to clean out his stomach which took away his strength. If these guys get it right, it should make for a fun race at regionals where they should be pushing each other for one and two.”

“We can’t let the teams or the guys in the past down,” he said. “They built this regional championship tradition. We not only have won regional team championships the past four years but we’ve also had individual champions each year. I have a feeling we’re going to come out strong in the next two races. I’ve made a few training changes that hopefully will create a lot tighter unit and defend that 79853 zip code with everything they’ve got.”