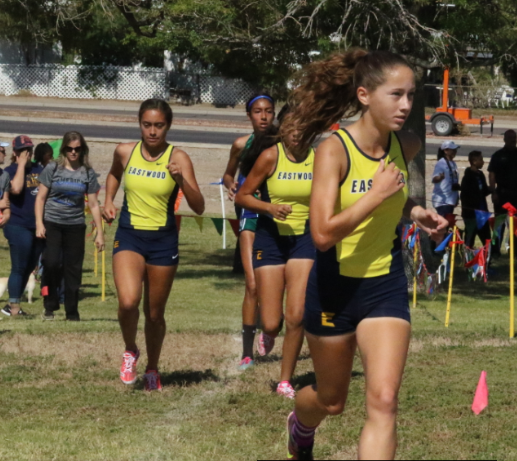 1. Eastwood: The Troopers return four runners from last year’s 6th place Region 1-6A team including its top runner junior Destiny Martinez who was 34th at regionals. Also returning are juniors Meadow Ortiz, Eileen McLain and Andrea Miramontes. Because of UIL reclassification, the defending District 1-6A champ will compete in District 2-5A.

2. Americas: The Trailblazers are the favorite in District 1-6A. The team is led by a strong junior class including Daphne Duran, Priscilla Villalobos, Victoria Duran and Mariana Guzman. Duran is the top returnee. She finished 25th at regionals last year. The team had a top ten finish at the Regional placing 7th.

3. Coronado: The T-Birds are primed to compete for a District 1-6A title with the return of Jenelle Darakjy for her senior year. Darakjy was 6th at the Region 1-6A race and 22nd at the state meet. A pair of juniors – Sophia Flores and Sydney Puentes – and senior Lilian Breceda are expected to give Americas a run for the district title.

4. Eastlake: The Falcons have an opportunity to do something special with the addition of Horizon transfer senior Aeriel Garcia and the return of last year’s District 2-5A champion senior Amaris Chavez. Last year, Garcia finished second in District 2-5A and 10th at regionals to advance to the state meet for the second straight year. Eastlake was second at district and 12th at regionals.

5. Montwood: The young Rams are ready to contend for a top three District 1-6A spot and a trip to regionals. The upstart Rams will be led by sophomores Karyme Garcia (sixth at district) and Jocelyn Ponce. Juniors Diana Mena and Sarah Diaz should be much improved, as well. Garcia placed 25th at the Region 1-6A Meet.

6. Horizon: The Scorpions are the defending District 2-5A champion, a team that finished 9th at regionals. Junior Destiny Beltran will lead the relatively young team. Beltran was fourth in district last year and 35th at regionals. Sophomores Andrea Villagomez and Kenia Enriquez will be counted on to score as will junior Jessica Floriano and senior Jasmine Baltazer.

7. Chapin: The Huskies have great senior leadership in District 1-5A champion senior Skyler Goodman. Chapin was 13th at regionals. Goodman placed fourth at regionals and 31stat the state meet. Sophomore Angela Astorga and seniors Ysabelle Grubb and Siona Astorga are seeking solid seasons and a return to the regional meet.

8. Franklin: It all starts with all-everything Eva Jess. The sophomore star runner is the reigning District 1-6A champion, fifth place finisher at the region and state meets. Seniors Kimberly Melton, Natalie Linford and Amalia Dorion will need to up their game if the Cougars have a shot at a regional berth.

9. El Paso High: The Tigers are the defending District 1-5A champion and with the core of that team returning, it looks likely they will contend for it again this year. Juniors Lucia Chavira and Marisol Hernandez will lead the charge to a return to regionals where the team finished 18th. Three sophomores – Vivian Shaheen, Alissa Kennedy and Camille Watts – round out the top 5.

10. San Elizario: The Eagles return five of its top runners from last season’s 7th place Region 1-4A team including its top runner junior Yajary Quiroz who finished 13that last year’s regional and 59th at the state meet. She joins classmate Natalia Perez and sophomores America Morales, Emily Guerrero and Desiree Lopez. Morales was placed 57th at state and 14th at regionals last year as a freshman.

My love of running began with my son Deric. His passion and talent for distance running opened my eyes to a sport I never imaged I would embrace with such enthusiasm. As a journalist at the El Paso Times, I was the lead writer for cross country and track for several years and I was able to tell the stories of these amazing unsung athletes. Never a runner myself, I decided to change that when I turned 50 in 2016 when I trained for my first 5K. I've been running ever since and I love every minute of it - well - sort of. View all posts by Victor R. Martinez